What is Health Hackathon?

In today’s technology world, Hackathon is a common term derived from mixing two words – hack and marathon, where “ Hack” is defined as exploratory programming, while “Marathon” describes a long or focused effort.

An event like a hackathon usually involves a large number of people gathering to code in groups and create software or hardware projects, with the goal of creating a working product at the end of the event.

The modern hackathon originated as a community event on June 4, 1999 hosted by Niels Provos of OpenBSD in Canada. It was also known as a hack day or hackfest at the time. Hakathon have held since 1999 in Canada

Around ten participants worked on cryptographic software for two consecutive days, ensuring compliance with the American regulations for the software, thus becoming the first hackathon in history.

Types and Examples of Hackathon events

For professional programmers or data scientists:

Those coding competitions are in either an offline or online format, in which the online competition may last for a month, a quarter or even a half-year, while the offline event may only last a day or a week. Besides, combinations of both can also be offered such as Google Code Jam and Kaggle competition. Regardless of the format, all of them share a common goal, which is finding the program that is written the most efficiently and/or produces the most accurate results. The judging criteria is very clear and can be as simple as a log loss function or a very complicated logic determined by the organizer.

Unlike hackathons focused purely on technology, corporate hackathons tend to emphasise more on business aspects, requiring presentations and prototype demonstrations. Thus, besides tech experts, it is also important to have marketers and designers.

Various companies have their own internal coding competition for employees, including Google, Facebook, and Microsoft. The gatherings are intended to facilitate some development of new products. As you might know, the Facebook Like button is one of the most notable outcomes of an internal hackathon.

A particular demographic group such as teenagers or students can also take part in beginner-friendly coding events. In a typical university hackathon event, leading mentors and industry experts are invited to conduct diverse workshops. In addition, these are usually competitive in nature with sponsorship awards.

Many universities with technology programs (UCLA, Princeton, Yale, etc.) not only hosted hackathons for students of their own but students from other schools. That is because their goal is to create a great learning environment where students can exchange and advance technical knowledge through connecting, collaborating and constructing.

Now, hackathons are widely available to companies and venture capitalists searching for the fastest way to create new software technologies and new means of funding and innovation. In other words, the technology industry realised that hackathons were able to offer them both talent and products at once.

Sponsorship, partnerships, recruiters, and other activities such as workshops, direct interaction with sponsors, hands-on labs, job opportunities, presentations, games, and free food made hackathons more popular among developers. This is pretty much how hackathons work today.

“Not calling for investment from the capital fund made us used to 'doing hard things.' AWING's philosophy is to think…

The second International Conference on Intelligent Systems and Networks - ICISN 2022 will be hosted by Swinburne Vietnam. ICISN 2022…

“Delighting the Future” Scholarship scheme The winner of the scholarship is chosen not only based on academic results and achievements,… 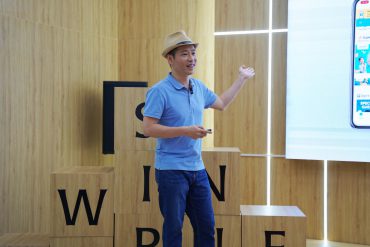 “Not calling for investment from the capital fund made us used to ‘doing hard things.’ AWING’s philosophy is to think big, do small deeds but…